Book Review for “A Wrinkle in Time: The Graphic Novel” 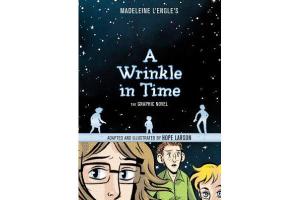 Hope Larson and Madeline L’engle’s A Wrinkle in Time: The Graphic Novel will be forever affectionately remembered in my mind as the first graphic novel I ever read; this is where it all started. I had never read a graphic novel until I read this work, and I was blown away by how quickly I fell in love with this genre. Before starting this book, I had qualms about this genre. I thought it might take away my sense of imagination with the added visuals, and I was worried that my brain would process the simultaneous use of pictures and words very slowly. As I began to read, a few things initially struck me: how much the illustrations aided my imagination, how the illustrations helped me grasp the characters and settings much quicker, and how fast I read through the pages. Reading my first graphic novel surprised me in all of these ways; none of my qualms had been confirmed. The first day I discovered graphic novels I ended up reading three of them. To say I enjoyed this genre would be putting it lightly.

Larson and L’engle’s graphic novel was a great introduction to this genre; it exhibited all the qualities that make for a great read. To begin with, the content of the novel was very conducive to this format. The visual elements were able to convey the elements of fantasy in ways that words alone cannot. At many places in the novel, the main character, Meg, describe fantastic scenes that don’t even exist in our world; this can be confusing to comprehend when reading a novel because there is nothing for such scenes can be compared to. This is where the visual representations came in handy. Also, many abstract ideas were discussed in this story including dimensions of space and time travel. The illustrations made abstract ideas concrete and imaginable.

While A Wrinkle in Time: The Graphic Novel was a prime example of this genre, it is impossible to enjoy a graphic novel without an exciting storyline. Larson and L’engle’s work has just that. The odd-ball main character Meg, her brother Charles Wallace, and her friend Calvin are mysteriously and suddenly transported throughout space and time by three unusual characters. Mrs. Who, Mrs. Whatsit, and Mrs. Which are three supernatural beings that blossom into wonderful friends, companions, and guides for the main characters. These beings support the young time travelers as they embark on a mission to save Meg and Charles’s father. Their father is a time-traveler himself and has been trapped on an alien planet. At this unusual place, the tree heroes must resist giving into “It”, the physical manifestation of mind control and conformity. Meg and her companions must fight with their minds, rather than their fists, to retain that which makes them human: their ability to think, love, and believe.

Everything about Hope Larson and Madeline L’engle’s A Wrinkle in Time: The Graphic Novel is new and exciting, from the far off places of fantasy, to the very style through which this story is told. Not only is A Wrinkle in Time a great novel, but it is a fun and visually engaging graphic novel as well.