Book Review for “The Silmarillion” 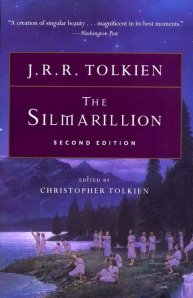 The Silmarillion is arguably the crowning glory of J.R.R. Tolkien’s literary and imaginary creations. This was one of the author’s earliest undertakings, and it wasn’t published until after his death; Tolkien poured everything he had into this work.

This dense novel has long been heralded as a long and arduous undertaking for any reader, and for quite some time this intimidated me. As my curiosity grew, I knew I had to give this a shot; even if I couldn’t complete this work in its entirety, I wanted to explore it for myself. I had heard that this work can be considered a history book of sorts, and I wasn’t misinformed on that. I was surprised however, to find how compelling and thrilling that history was.

This book is equal in comparison to ancient myths and legends, and as many epic stories start, this was began with a creation story. This creation story was at the same time similar and yet dissimilar to all creation stories I have ever read. Tolkien wows his readers, as he wowed me, with the mysterious and intriguing creation of his Middle Earth through the melodious song of an omnipotent being. I was personally stunned and awed as the themes within this creation song sung to the infantile world before it began.

It is during this creation story and many other occasions throughout the novel when J.R.R. Tolkien’s Catholic faith shine through his work. It’s not hard to see how some examples of his work can easily be confused with Scripture. For instance, “These too in their time shall find that all that they do redounds at the end only to the glory of my work.” As a  Christian-Catholic reader, I enjoy seeing the impact of Tolkien’s faith on his work. Even readers who do not share this similar background with the author will enjoy seeing his life’s work unfold within the pages of this book. This is due in part because The Silmarillion sets the scene for Tolkien’s later works such as The Hobbit and The Lord of the Rings Trilogy. The history, language, geography, and conflicts of these widely known works are all introduced in this novel.

To any reader seeking to conquer this challenging work, I salute you. Yes, it is a lot to read, but for any Tolkien enthusiast this is a welcomed challenge. J.R.R. Tolkien’s The Silarillion takes its readers on an epic journey that is nothing short of astounding.

2 responses to “Book Review for “The Silmarillion””